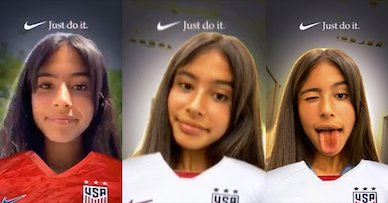 Nike teamed up with the U.S. Women’s National Soccer Team to sponsor their first shoppable Snapchat Lens for apparel, giving fans the opportunity to virtually try on and purchase their jerseys.

As the U.S. team gears up to play in the FIFA Women’s World Cup in France next month, Nike is supporting them through a multifaceted campaign, including this one day only augmented reality feature on Snapchat. On May 9th, fans were able to use the lens to add in the jerseys and Nike’s “Just do it” slogan to their selfies. If Snapchat users were interested in purchasing one of the jerseys, they could just swipe up and buy from Nike.com without leaving the app.

By integrating this Snapchat feature into their campaign, Nike was able to promote their partnership and authentic apparel in an interactive way and take advantage of a platform that encourages fans to share directly with friends. The brand added in an element of convenience and experience that’s likely to drive more sales than traditional advertising.