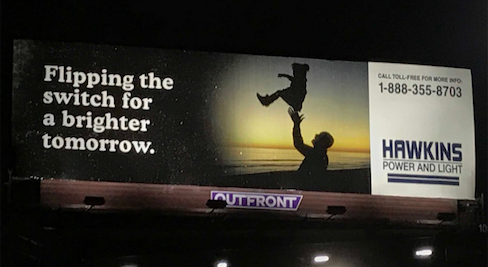 If you aren’t already aware, Hawkins Power and Light is a central plot point for the Netflix hit show Stranger Things. It’s also the subject of the brand’s latest out-of-home ads promoting the upcoming premiere of Stranger Things Season 2.

The billboards featuring the unique aspect of the show have been spotted in New York and Los Angeles, and fans are sharing their pictures to social media like crazy. While the focus on the fictional business is clever in itself, there is another aspect that is drawing attention: a functional phone number featured on the ad. When you call the 1-800 number, you’ll hear what you’d expect from any corporate number – soothing hold music and a number directory. Then, you’ll hear a disquieting static sound, much like what you hear in many episodes of Stranger Things.

The promotional efforts by Netflix leading up to the season 2 premiere have been impressive, these billboards being just one of many clever executions. To name a few examples, the premiere date was announced with a surprising Super Bowl ad in February and other billboards featuring subtle but recognizable photos from the show have been spotted across the country.