IHOP Flips Name to “IHOb” to Promote its Burgers 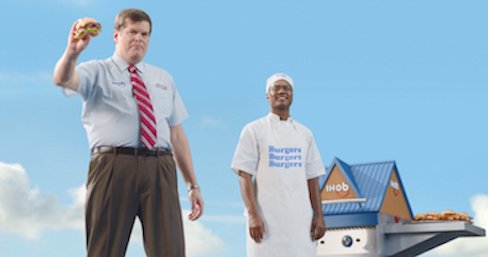 IHOP recently announced on Twitter they would be changing their name to “IHOb,” inviting fans to guess what the “b” stood for. After a week of guesses and teases, the brand finally revealed the answer: burgers.

According to the brand, over 30,000 people participated in guessing the meaning behind the name change during the week leading up to the reveal. The mystery further intrigued customers who visited IHOb’s flagship restaurant in Hollywood, CA, where the brand had installed new signs on the exterior of the building. To celebrate their rebranding, IHOb hosted a “VIB launch party” at the store on June 11 after revealing the true meaning of the “b.” Other stores across the country are set to receive new signage and branding inside the restaurant.

Although IHOb’s stunt received mixed reactions, the interactive campaign caused the brand’s popularity on social media to skyrocket after years of drastically declining share of voice. With the decreasing popularity of pancakes and trending burger conversations, IHOb’s rebranding has the potential to increase its relevance and popularity with a customer base whose tastes are rapidly changing.