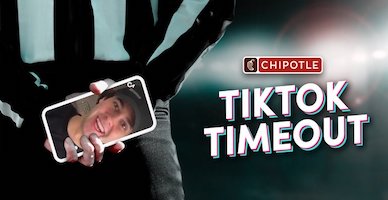 Participating TikTok stars, including David Dobrik, Zach King and Avani Gregg, will produce sponsored content featuring Justin Bieber’s hit single “Yummy,” and the content will be searchable using #TikTokTimeout. It is geared toward encouraging viewers to use their mobile phones to participate in Chipotle’s sales promotion, which applies to all Sunday orders in February that cost $10 or more and are made via the Chipotle app or Chipotle.com. This campaign is meant to appeal to Gen Z consumers and compete with traditional Super Bowl TV ads.

This is an innovative approach to diverting attention from one of the most-watched live television events of the year. It will be difficult to predict just how many Gen Zers will tune in to TikTok in favor of the Super Bowl’s typically high-quality commercials. However, this campaign has major potential to generate buzz among hundreds of millions of younger consumers who have flocked to TikTok in the past three years.