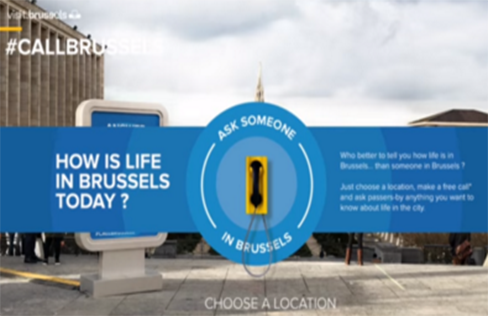 We all know reviews are a trusty marketing power tool these days, but what can be more authentic and genuine than real-time conversations?

To encourage tourism in a country that has been recently plagued by terrorist threats, Brussels’ tourism team created an interactive campaign that allowed potential visitors to engage with real-life residents about what was really going on in the area. #CallBrussels campaign drove foreigners to the tourism site to make phone calls to one of three different booths set at popular destinations around the city (Mont des Arts, Place Flagey and near the newly-famous town hall of Molenbeek). On the other end, local residents were encouraged to pick up the phone and converse with these potential tourists about life in Brussels in attempt to encourage the feeling of safety. The stream of conversations in the first 5 days lead to a significant boost in #CallBrussels social visibility. Not only were foreign visitors getting the information they needed through the best source of promotional marketing, Brusselians were able to showcase pride for their country during a time of unrest. Word of mouth is certainly a powerful weapon.