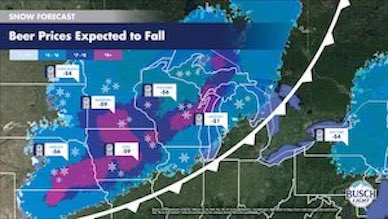 Busch Beer recently announced a promotion meant to boost sales of its beverages during the winter season. For every inch of snowfall in seven select states, the company will take $1 off one or more packs of Busch, up to $30 and excluding sales tax.

Statewide discounts will be cumulative between January 1, 2020, and March 21, 2020. They will be determined based on snowfall in one city per state, including Des Moines, Iowa; Grand Rapids, Michigan; Minneapolis, Minnesota; Fargo, North Dakota; Omaha, Nebraska; Buffalo, New York; and Green Bay, Wisconsin. Snowfall is being tracked using a microsite and interactive billboards in each city. Rebates will be available this spring in the form of Anheuser-Busch branded prepaid Mastercards or digital cards.

This is an exciting approach to tackling lower sales during the winter season, a time of year when alcohol consumption is at its lowest. The unpredictability of winter weather is what makes this promotion so appealing to consumers. Although the success of this campaign has yet to be determined, Busch Beer gets full points for creativity.