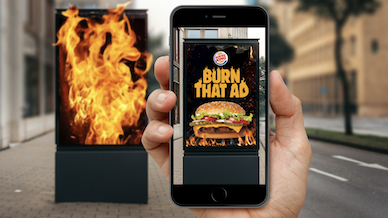 In their “Burn That Ad” campaign, Burger King added an augmented reality feature to their app that allows customers to “burn” rival restaurant’s ads in exchange for a free Whopper.

Customers who download the app in Brazil can point their smartphones at a competing restaurant’s ad and watch it burn up in flames into a Burger King ad. Once the flames disappear, the screen reveals a voucher for a free Whopper. The campaign was created specifically for this market to promote “BK Express,” a tech tool that allows customers to pre-order and pay for their meal before arriving at the restaurant. The brand plans on handing out half a million Whoppers.

By giving fans a fun reason to download and interact with the app, Burger King will most likely be able to reach and educate more customers on its convenient features. The brand does a good job of consistently finding ways to attract and engage younger customers who often opt for healthier restaurant options.