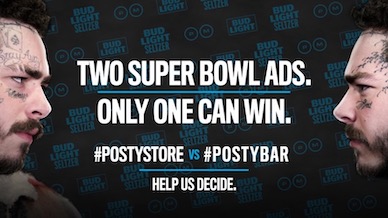 With the recent release of Bud Light Seltzer, it was a no brainer to incorporate it into its 60-second Super Bowl spot, but with two quality ads to choose from, the beer brand turned to its fans for help.

Bud Light partnered with Post Malone to create its Super Bowl ad this year, featuring both its beer and hard seltzer. After being pleasantly surprised by Post’s performance during the shoot, the brand was left with a hard decision between two fun and comical spots: #PostyBar and #PostyStore. Bud Light is asking fans to help by promoting their favorite one through likes and comments on its Instagram, Facebook and Twitter pages. The brand will continuously monitor the social conversations and hashtags to determine the winning ad that will air Sunday during the big game. Bud Light plans to maintain fan engagement after the spot airs by sharing behind-the-scenes moments, memes and GIFs.

Bud Light is getting the most out of the millions of dollars its spending this year on a Super Bowl spot by building up hype for the ads beforehand and finding ways to extend engagement after. Getting fans involved on social not only extends the ad’s reach but also increases the likelihood that viewers will keep an eye out for the winning ad on game day.