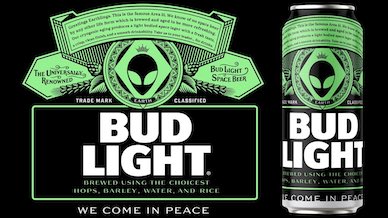 After the tongue-in-cheek Facebook event “Storm Area 51, They Can’t Stop All of Us” went viral earlier this month, Bud Light joined the conversation on social media by tweeting an Area 51 Special Edition can design.

The Facebook event description reads, “We will all meet up at the Area 51 Alien Center tourist attraction and coordinate our entry. If we naruto run, we can move faster than their bullets. Lets see them aliens.” Set to take place on September 20th, the event has quickly gained 1.9M “going” and 1.4M “interested” responses. Although it started as a joke, Bud Light’s alien-themed can design quickly caught attention and received many responses asking if it was real news. The brand immediately responded with a challenge: 51,000 retweets and we’ll make it happen. The tweet currently has 40.6K retweets and 62.2K likes.

By reacting quickly, Bud Light was able to take a conversation already happening on social media and turn the attention on them. Many Twitter users have even joined the thread saying they don’t drink Bud Light but would definitely buy these special edition cans.