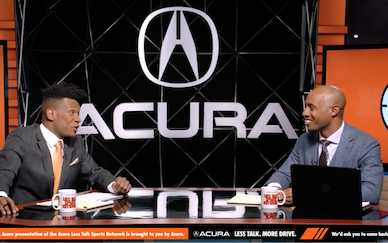 Acura is launching a campaign called the “Less Talk Sports Network” to connect with fans throughout the March Madness basketball tournament.

The brand has teamed up with ESPN basketball analyst Jay Williams and comedian Seaton Smith to host this pre- and post-game show, during which they have to analyze each game in just 30 seconds. The campaign will run on sports sites such as ESPN and Turner Sports as well as across social media platforms Facebook, Instagram, Reddit and Giphy. Acura will have a homepage takeover on ESPN where all ads will be updated in real-time based on the outcome of each game, while social media content will focus mainly on real-time game reactions that will also be turned into GIFs and memes. This campaign supports the brand’s current “Less Talk, More Drive” platform.

By updating these ads and posting social content in real-time, Acura is able to stay relevant and keep fans engaged throughout the tournament. Adding a comical spin and the GIF/meme component is likely to increase shareability among viewers.